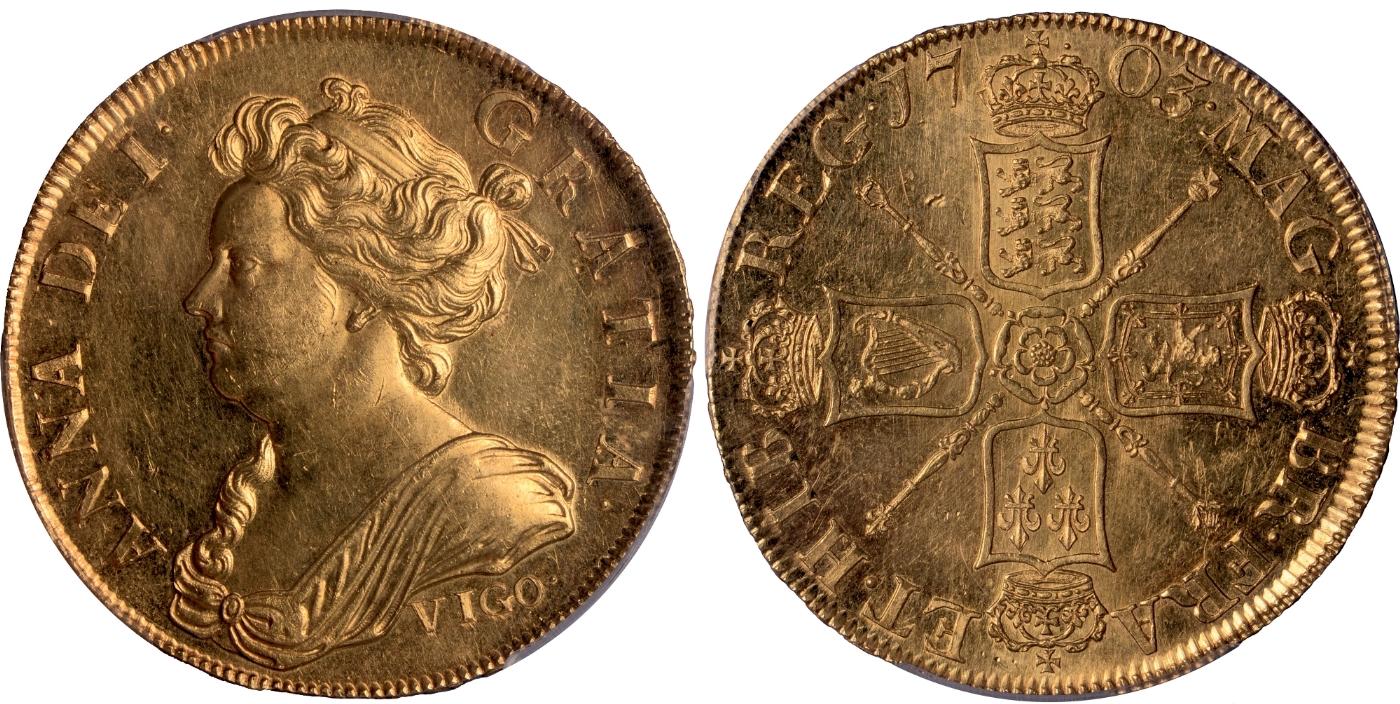 British Coins, Anne, five guineas, 1703, SECVNDO, VIGO, dr. bust l., rev. crowned cruciform shields, rose in centre, sceptres in angles (S.3561; cf. Schneider 523: on this specimen the hallmark is higher and closer to the queen's shoulder), certified and graded by PCGS as Mint State 62, some light marks on bust prevents this from grading 63-64, the queen's portrait boldly detailed and superbly centred (note the placement of the hallmark), the royal shield similarly sharp and centred, much lustre remaining, surfaces showing light abrasions in the soft gold but no damage; in all, one of the finest surviving examples of this great rarity, a spectacular mint state example
Curiously, three variant positions of the hallmark are now known to exist, of which the variety seen on the present specimen appears to be the rarest. As the coin was struck in extremely limited numbers, according to all historical accounts, this represents quite an opportunity for research to explain how three obverse dies were created.
The most recent history of the Royal Mint, edited by C. E. Challis, underscores the mint's considerable need for gold specie at this time. Just as Anne assumed the throne, the War of Spanish Succession broke out, in 1702; it was a battle for dominance in much of Europe between two sets of allies (and old enemies), England and the Dutch Republic, against the hated French and the Bourbon Spanish. Hard money ruled the day, not credit nor good will. The vigours of war were upon the British just as the coffers of the Bank of England suffered from a lack of gold. Fate, however, was about to intervene in a battle which no one could have predicted to become memorable. The result was more patriotically stimulating than financially helpful, yet its influence was considerable.
The action commenced when a fleet of Anglo-Dutch warships tried to seize Cadiz in mid-September 1702, but the attempt was a failure. The commander of the fleet, Admiral Sir George Rooke, had just turned in disgust to begin his homeward journey when he was informed by spies that a Spanish treasure fleet was known to have recently anchored at Vigo Bay on the northwest shore of Spain. Rooke's warships turned about quickly. What was at hand, he had learned quite unexpectedly, was an armada of Spanish ships carrying gold and silver specie mined in colonial Mexico. Spies informed Rooke that the fleet had sailed from Veracruz protected by a French squadron of fifteen warships, and that three galleons were loaded with silver and gold. Frigates and support ships added up to what must surely have seemed a daunting fleet of 56 vessels, many carrying merchandise intended for sale in Spain – all of them now moored in Vigo Bay. Eager for booty, Rooke did not hesitate to engage the enemy. A furious naval battle was fought on 23 October and the victory this time was England's despite a forbidding boom consisting of heavy chain and timber that stretched across the entrance to the bay, as well as a battery of cannons, meant to block and defeat any attack. But the allies' men o' war crashed through the boom with little difficulty. To stall the advance, the Spanish even set fire to one of their own vessels, alongside the Dutch admiral's flagship, intending to burn the Dutch ship. The Spanish ship, however, was loaded with snuff from the Indies, and it blew up! Rooke's engagement was successful. The Spaniards' cannons were overcome. The boom intended to block passage to the harbour was broken through. With all resistance gone, the Anglo-Dutch warships sailed right towards the docked Spanish ships, easily destroying or capturing the remaining enemy ships. In a day and a half, the Battle of Vigo Bay had been won, and the booty was ready to be seized. It was a tremendous victory! Jubilation reigned until the English discovered that most of the ships' holds were nearly empty, that the treasure from the New World mines had been unloaded and carted away before they arrived at Vigo. Nevertheless, winning the battle was a significant moment in the war and what remained of the specie was taken and delivered to the Royal Mint. Although it fell far short of expectations, and was not in the form of New World cobs, most of the booty was a hefty 4,500 pounds of silver that had been ornaments and 'plate' belonging to the Spanish and French officers. Challis notes, as have previous chroniclers, that the gold specie weighed just 7 pounds, 8 ounces. It has long been believed that, from this small amount, all British gold coins given the boasting hallmark VIGO were minted: a mere handful of the large 5-guineas, it is said, as well as a small number of the two other denominations, guineas and half-guineas. The coins' celebrity has only intensified through the centuries. Just as they were about to be minted, however, Queen Anne issued a royal warrant authorising their creation in which she poignantly stated that the VIGO hallmark would be applied to the coins so as to 'Continue to Posterity the Remembrance of that Glorious Action' at Vigo Bay. And, indeed, Anne's Vigo coinage remains some of the most desirable of all British coins.

Question about this auction? Contact Baldwin's of St. James's
« Previous lot    Next lot »