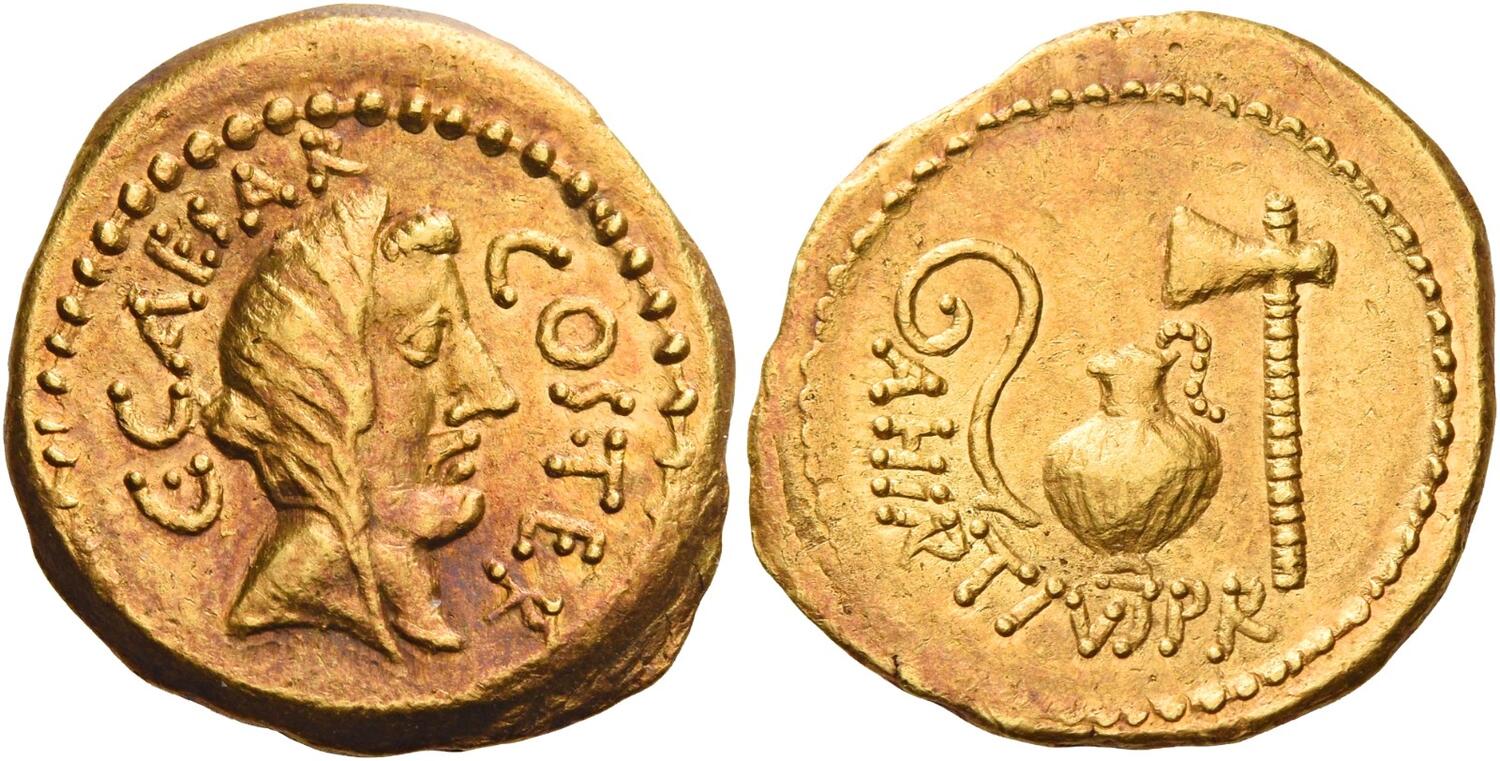 Privately purchased from Kurt Spanier in 1983. This coin is sold with an export licence issued by the government of Spain.

Julius Caesar's defeat of his opponents from 60 to late 47 BC was celebrated by a quadruple triumph in Rome. His battle-hardened legions had first spent eleven years in the conquest of Gaul. This was followed by a march on Rome to declare the senate mandate that Caesar step down as invalid and unacceptable. After a short time, the legions marched overland to Spain to defeat the Pompeian legions stationed there – made famous by the first part of the famous quote "fighting an army without a general". After victory in Spain the troops marched back through Rome to Brundisium where they then travelled across the sea to face the "general without an army" as they defeated Pompey at Pharsalus. They chased Pompey to Egypt only to find that he had already been assassinated. Whilst there, Caesar dealt with the family troubles between Cleopatra VII and Ptolemy XIII, placing Cleopatra firmly on the throne. On his way back to Rome, with legions in tow, Caesar travelled through Pontus to put down a rebellion by Pharnaces (the battle with the famous quote "Vini, Vidi, Vici" – I came, I saw, I conquered). After a short stint back at Rome, the legions were again moved to battle in North Africa to face down Cato and Scipio. It was after the African campaign that Caesar finally returned to Rome to get what he felt was due him for years – a triumph! The triumph had four days of parades: first a day for the conquest of Gaul; followed by the defeat of Ptolemy XIII; then the defeat of Pharnaces; and lastly the defeat of Juba. It must be noted that the Romans did not celebrate defeating other Romans so the contrived intentions of the Egypt and Africa campaigns are of interest. As part of this grand celebration there were many other commitments to also settle. Caesar had promised his troops a great deal and now that his victory seemed secure he was required to pay up. His promise was for 5,000 denarii to each legionary and 10,000 denarii to each centurion. The financial needs were enormous. It is clear from the number of specimens known of the above aureus type that a large mintage in gold (one aureus equaled 25 denarii at the time) was used to supplement the payout. The highly variable nature of the obverse female head is a testament to how hastily the mint produced these coins. There may not be another gold issue from the Roman Empire that has ever been this casually engraved and produced.


Question about this auction? Contact Numismatica Ars Classica
Next lot »