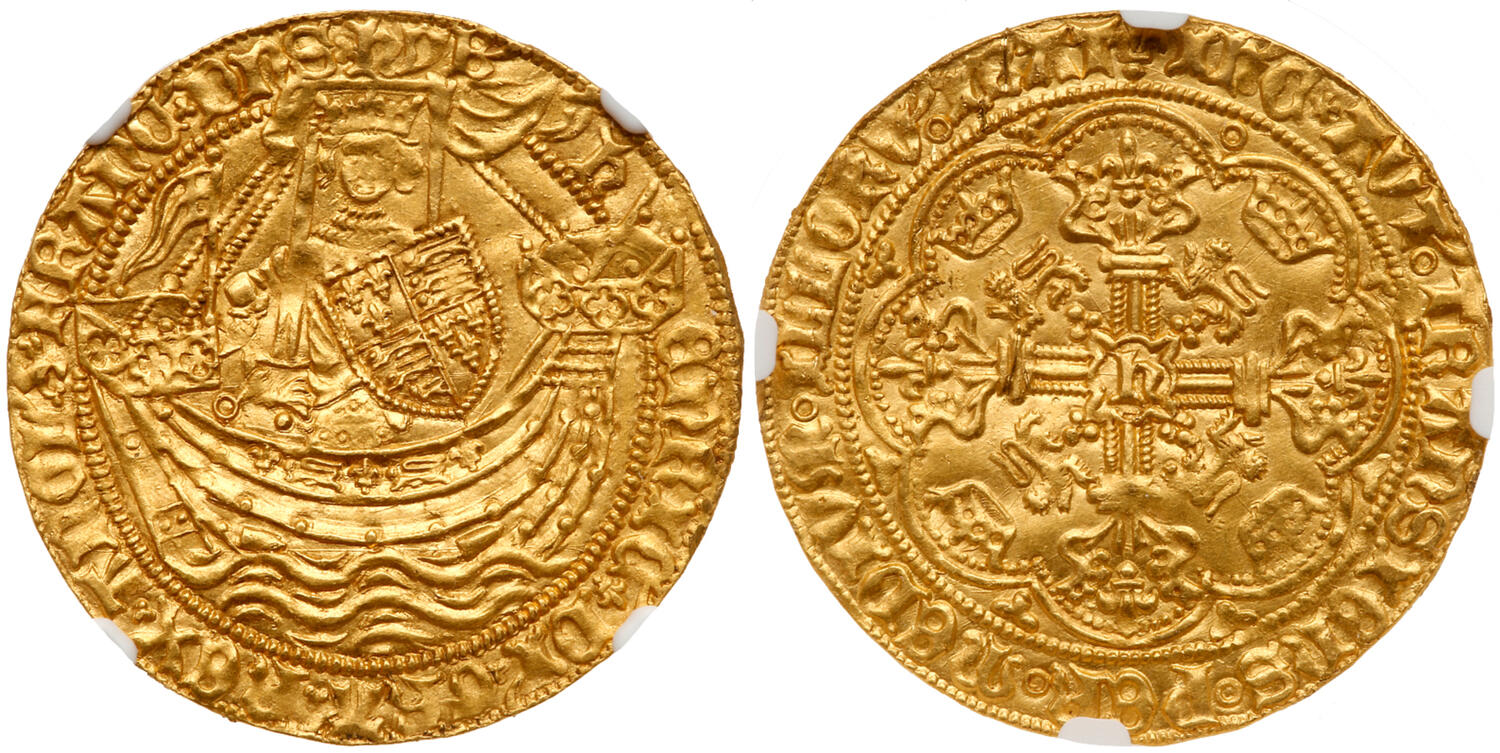 Watch List notes:
Click to save a note
Henry VI, first reign (1422-61), Gold Noble of six shillings and eight pence, Calais Mint, Annulet Issue (c.1422-30). King standing in ship with upright sword and quartered shield, flag at stern, annulet by sword arm, lis after King's name, small trefoils stops in abbreviated Latin legend h EnRIC+ DI: GRA': REX: AnGL': Z: FRAnC': DnS: hyB', rev. h at centre, ornate cross with lis terminals, crown over lion in angles, all within beaded and linear tressure of eight arcs, annulet in upper right spandrel, large fleurs in other spandrels, initial mark fleur de lis, annulet stops in abbreviated Latin legend +Ih'C*AVT'o TRAnSIEnSo PERo mEDIVmo ILLORV'o IBAT, weight 6.94g (Schneider 299; N.1415; S.1803, incorrect S. number on NGC holder). Toned, has been graded and slabbed by NGC as MS61. Estimated Value $5,000
NGC Certification 5880654-003. We note this is only the fifth example currently to have ever graded at the MS level across both services. The abbreviated Latin legends translate as on the obverse "Henry by the Grace of God, King of England and France and Lord of Ireland" and on the reverse "But Jesus, passing through the midst of them, went His way" taken from the Bible. As of 1422 the Calais Mint in France reopened after a period of closure since 1404 as there was a requirement for aliens having to pay for their English wool at the Staple Company in English Nobles, compelling them to have their foreign bullion currency converted at the Mint to Nobles. The length of credit extended to such wool buyers was at the same shortened or cut leading to a further influx of bullion which rose to very high levels from 1422-24 with some £60,000 of gold coined there. All in all some £100,000 worth of gold was struck at Calais which weighed some 6,000 pounds.
Ex Clarendon Collection part I, Bonhams, 27th March 2006, lot 494.
Question about this auction? Contact The New York Sale
« Previous lot    Next lot »