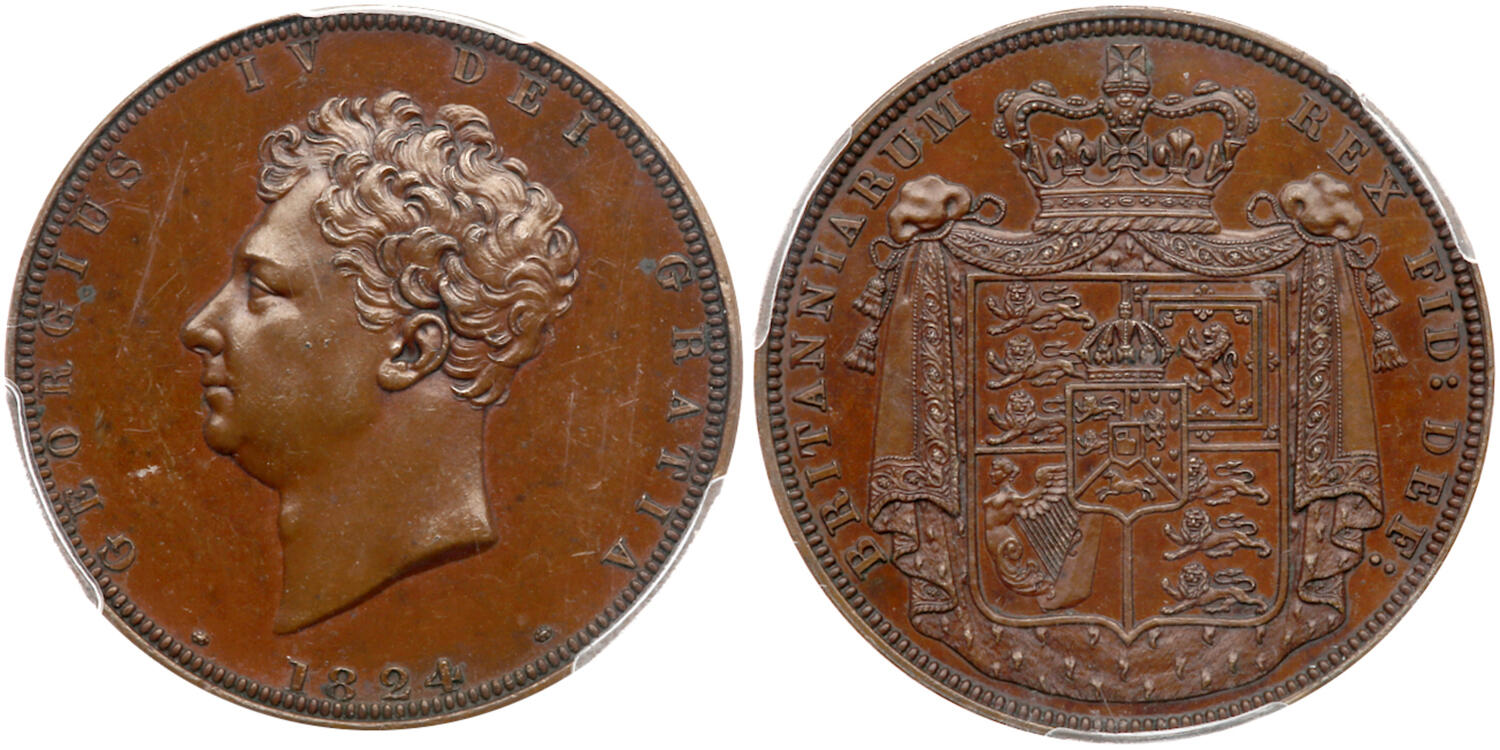 Watch List notes:
Click to save a note
George IV (1820-30), Pattern Two Pounds, 1824. Struck in bronzed copper, engraved by William Wyon after the model by Francis Chantrey, bare head left, of a different hair arrangement to later proof issues in gold, more pronounced Adam's apple in neck, plain truncation, date below close to border teeth, rosette either side, legend close to toothed border surrounding, GEORGIUS IV DEI GRATIA, rev. engraved by J. B. Merlen, quartered shield of arms with an escutcheon of the Arms of Hanover upon crowned ermine mantle, legend and toothed border surrounding, BRITANNIARUM REX FID: DEF:, edge plain (WR 221 R2; S.3799). Toned with some hairline marks in the fields, has been slabbed and graded by PCGS as PR63. Estimated Value $3,000
PCGS Certification 208156.63/37216223. At the time of writing we note this is the second finest graded of these rare patterns of a total of four graded across both services. The Latin legends translate to on obverse "George the Fourth by the Grace of God" and on the reverse as "King of the Britains, Defender of the Faith." This intriguing pattern is the forerunner of what became the gold proof Two Pounds dated 1825 and 1826. The reverse of this early copper pattern piece by Merlen matches the later gold pieces albeit the lettering is a little less distinct on the later gold pieces; however the obverse of this piece engraved by William Wyon is different in a number of details showing the earlier thoughts of Wyon in the design. Wilson and Rasmussen in their gold pattern book detail this bust as "small" bare head compared to the later gold issues, this is not true as the size of the head is the same. What is different is the placing of the legend and date on this 1824 piece which is much closer to the toothed border which seems in turn to have more border teeth than the later patterns. The lettering being closer to the border gives the illusion of the head being smaller as there is more background field between the bottoms of the letters and the bust, but the bust is not actually smaller. A quick count of the border teeth below the date only reveals 14 complete teeth for the width from start of 1 to end of 4. On the 1826 gold Proof the tooth count is 13 complete teeth only, so the spacing of teeth differs and various letters in the legend point either to tooth or a space in deference to the 1826 issue. The head though of a similar size, is different to the later proof gold issues in the following ways. Most noticeable is the hair is of a different arrangement, not as detailed in parts of the curls around the top and back of the head with more incomplete swirls which have been flourished by the time of the 1825-26 proof gold issues. However, the hair is more noticeably different in the area at the centre of the head above the ear where the arrangement differs entirely. The nostril of the nose on this piece is more round and shorter than the elongated nostril on the later gold pieces. The Adam's apple is bulbous and more prominent on this pattern too. The chin is more rounded on this pattern whereas the later gold proof coins have a more pointed appearance. The ear is more rounded around its top and appears to be at more of an angle than the more upright flat top ear of the later gold pieces. This 1824 copper pattern does have a plain edge companion version struck in gold listed as WR221, as well as an inscribed edge version (WR220) and a uniface obverse (WR222). The 1825 and 1826 dated proofs are all of the later type head just described above. An intriguing pattern which does differ from the 1825 and 1826 gold Proofs significantly which is not usually pointed out or described in other numismatic entries elsewhere.
Question about this auction? Contact The New York Sale
« Previous lot    Next lot »