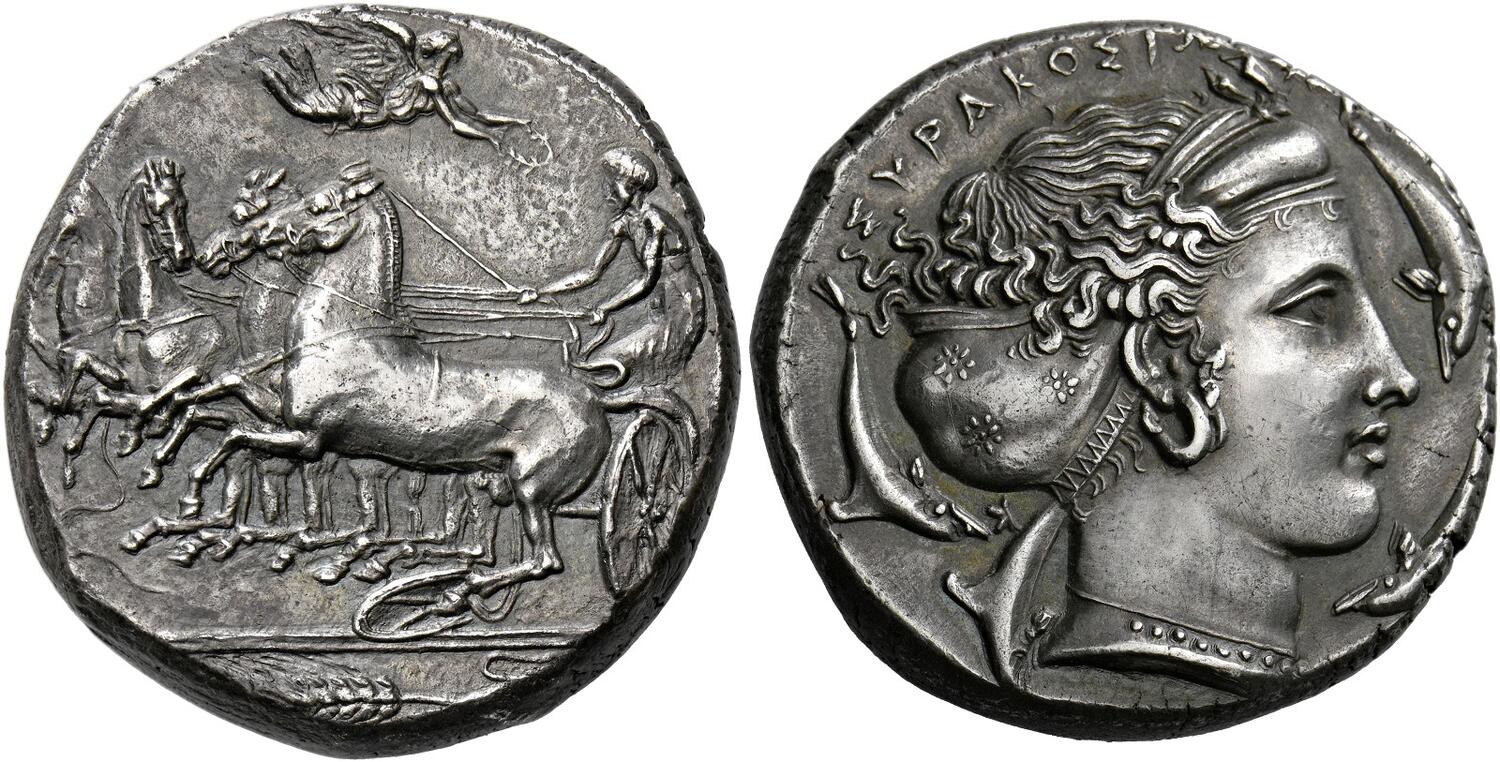 Watch List notes:
Click to save a note
Syracuse.
Tetradrachm, unsigned but attributed to Eukleidas circa 413-399, AR 17.29 g. Fast quadriga driven l. by charioteer, holding kentron and reins; in field above, Nike flying r. to crown the driver. Beneath horses' hooves, wheel and in exergue, ear of barley. Rev. ΣYPAKOΣIΩ – [N] Head of the nymph Arethusa r., wearing double-hook earring and necklace with six pearl-shaped pendants; hair bound by ampyx in front and sphendone ornamented with stars; in l. field, small, K. Around, two pairs of dolphins swimming downwards. Rizzo pl. XLVII, 12 (these dies). Gulbenkian 287 (these dies). AMB 470 (this coin). Tudeer 68A. Coins, Artists and Tyrants 68Aa (this coin).
Very rare and possibly the finest specimen known of this magnificent issue, undoubtedly
one of the finest of the entire Syracusan series. A portrait of Arethusa of enchanting
beauty in superb Classical style perfeclty struck and centred on a broad flan
and with a delightful old cabinet tone. Good extremely fine

Ex NAC sale 13, 1998, formerly exhibited at the Antikenmuseum Basel, 470. Privately purchased from Leo Mildenberg at Bank Leu in December 1955. From the Athos and Dina Moretti collection.
This tetradrachm is a tour de force from the greatest age of creativity at the Syracuse mint. Though the portrait on the reverse is a sublime masterpiece, it is the obverse that demands our attention, for it is perhaps the most daring and inventive of all chariot scenes produced at Syracuse. Only about a decade before these dies were cut, the chariot scene on Syracusan tetradrachms had evolved from a somber, canonical depiction inspired by an Attic vase painting into an explosive scene in which the horses were shown in high action. With this innovation it was shown at a slight angle so the artist could dwell on the physiognomies of the horses and could show the chariot with a new perspective. The style of the chariot scene in the century prior to these innovations was formulaic: though the position of the Nike varied, the chariot was shown in profile, with only the slight overlapping of the horses and the separation of their heads to indicate that more than one was present. Very few dies from that initial century diverged even slightly from the standard formula (see Boehringer dies V45, V107, V286, V291, V326), with the work of a single artist in about 440 B.C. (Boehringer dies Boeh. V295 and V296) being noteworthy, if not especially accomplished. Once we enter this dynamic period of about 415 to 385 B.C. some extraordinarily talented artists energized Syracusan coins with a level of innovation that had never before been seen. Not surprisingly, several of these artists signed their dies and produced works that were influential far beyond the shores of Sicily. Leading the way was Euainetos, who seems to have been the first to express complete freedom in the way he depicted the chariot at an angle, as if it was turning the bend (Tudeer die 10). This particular die, Tudeer die 25, takes Euainetos' inventiveness to a new level by adding unexpected elements to the scene. Here we have a snapshot of a calamity: one of the reins has been pulled from the driver's hand and the horses trample upon a wheel that has broken away from a competing chariot. The fact that our charioteer is being crowned by Nike is all the confirmation we need that he and his team emerged victorious at the expense of a competitor whose chariot had overturned in close proximity