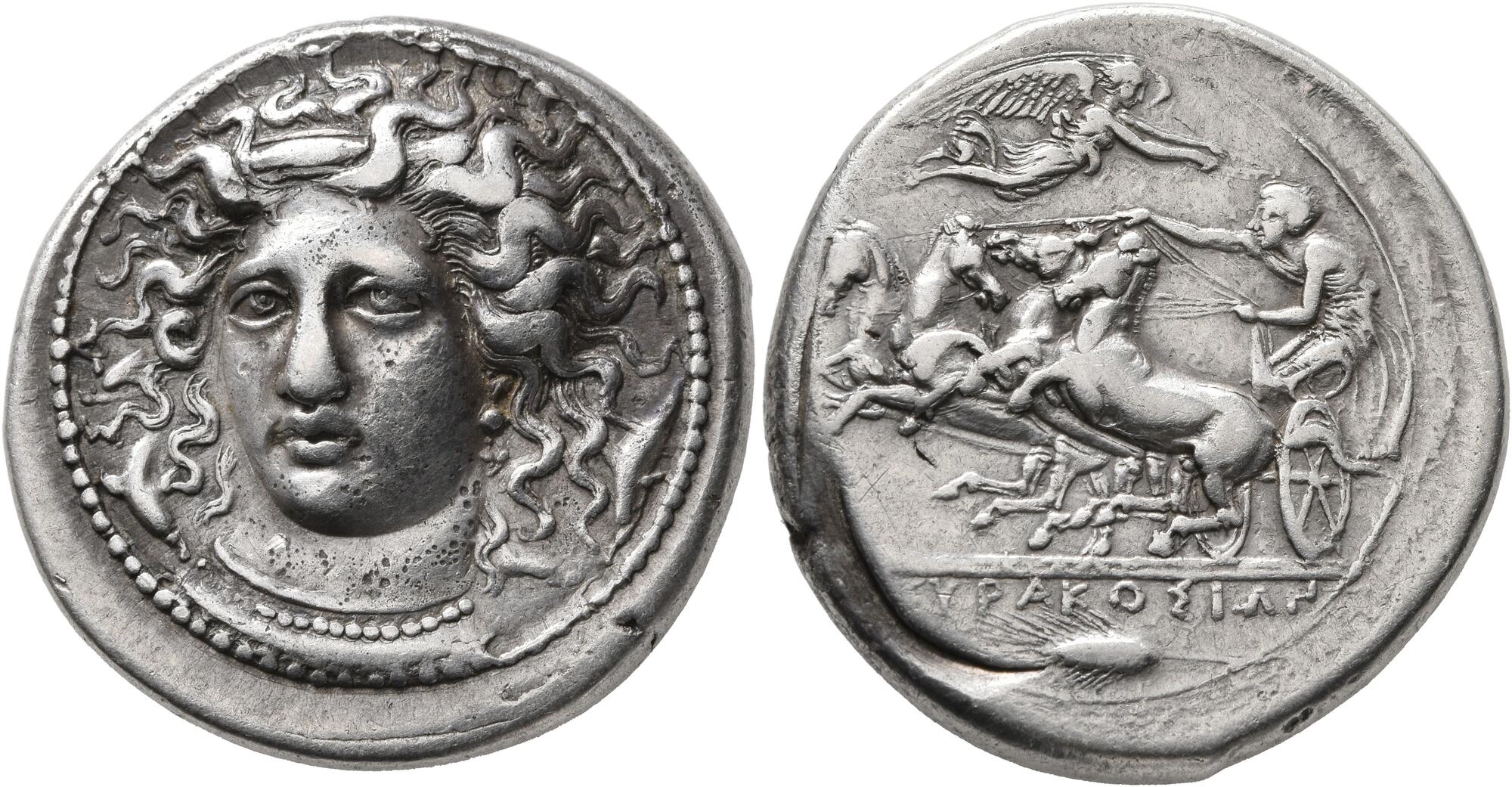 Watch List notes:
Click to save a note
SICILY. Syracuse. Second Democracy, 466-405 BC. Tetradrachm (Silver, 28 mm, 17.14 g, 4 h), dies signed by Kimon, circa 406-405. Head of Arethusa facing slightly to left, wearing ampyx inscribed [KIMΩN], single-pendant earring and collier ornamented with pearls; her hair flowing around in curls; around, four dolphins; one swimming downward on the left, with the head of another one, the beak of which is flanked by the letters Σ-Ω, emerging in the curls above; a third dolphin is swimming down on the right toward a fourth presenting from behind Arethusa's neck; above, outside the dotted border, [APEΘOΣA]. Rev. Charioteer driving quadriga galloping to left, holding kentron in his right hand and reins in his left; above, Nike flying right, crowning the charioteer with a wreath; on ground line, [KI]MΩN; in exergue, ΣYPAKOΣIΩN above grain ear. BMFA 417 = Warren 368 (same dies). Boehringer, Ognina, pl. 37, 297 (same dies). Dewing 846 (same dies). Fischer-Bossert, Coins, 80 = Tudeer 80 (O29/R53). Gillet 657 = Jameson 822 (same dies). Rizzo pl. XLVIII, 11 = SNG München 1068 (same dies). A wonderful example of this exceptionally important issue, struck from enchantingly beautiful dies both signed by the celebrated master engraver Kimon. Lightly toned and with a very well struck obverse. Some very minor pitting to Arethusa's neck and the reverse struck slightly off center, otherwise, good very fine.

Kimon's facing Arethusa certainly ranks among the most celebrated coins of antiquity, on par with the Syracusan Demareteion, the Athenian dekadrachm and Brutus' EID MAR issue. Its fame stems from the masterful composition of the two known obverse dies, which show the head of the nymph Arethusa facing as opposed to the traditional way of showing her in profile. Kimon was not the first Syracusan artist to switch to such a radically different perspective, Eukleidas' facing Athena beat him by some years. However, it was this exceptionally gifted artist who brought the new concept to perfection.

Kimon masterfully overcame the many difficulties arising from portraying a deity en face, creating a wonderful image of the nymph Arethusa of timeless beauty. She is depicted with her head turned slightly to the left and with a calm and serene look that contrasts remarkably with her long hair flowing energetically around her head in curls. As such, the artist not only reveals the full, uncovered beauty of the nymph, he also hints at the liquid environment she is living in, a notion that is further enhanced by the appearance of four dolphins around her head. In fact, this is perhaps the most endearing of the many elements hidden in Kimon's chef d'oeuvre, as the lovely animals are all carefully arranged in different positions, with one, on the left, being chased in a downward direction by another one whose head pops up between Arethusa's curls, whereas the other two, one of which is hiding behind Arethusa's neck, are swimming toward each other on the right. Clearly the artist was thinking of the playfulness for which dolphins were, and still are, known in many cultures around the globe when he was working on these details.

Turning to the reverse, here, too, we can see the master engraver's gifted hand, having refined the classical motive of a victorious charioteer by showing the horses rearing up, their heads in full motion, thereby perhaps capturing a particular moment in a race that secured the driver's victory. Above, we see Nike, her chiton blowing in the wind, flying to the right and gracefully placing a wreath on the winner's head. Kimon must have been particularly proud of this die, as he also signed it with his name in miniscule letters on the exergual line, a signature that is not present on the other reverse die (R54).

In his recent thorough treatise of the coinage of Syracuse during the Peloponnesian War, Fischer-Bossert dated Kimon's facing Arethusa issue to the time of the great Carthaginian invasion in 406-405 BC, which resulted in the sacking of Akragas and the capture of Gela and Leontinoi. A few years after the great Athenian invasion, this was once more a perilous time for the Greeks of Sicily, whose very existence as independent Hellenic poleis now seemed at stake. It is against this background that the Σ-Ω flanking the dolphin hidden in Arethusa's left curls is to be seen. This miniscule detail, which was only noticed by H.A. Cahn in 1993, is most likely an abbreviation of the word ΣΩTEIPA, 'saviour', serving either as a plea for help to the nymph in a moment of crisis, or as an expression of gratitude once it became clear that Syracuse, unlike its less powerful neighbors, had been saved from the dreaded African enemies.

We know from the coinage of other cities that Kimon's masterpiece was highly regarded among his contemporaries and widely received throughout the Greek world, with poleis and dynasts in Magna Graecia, Greece and Asia Minor soon following suit and producing their own coins featuring facing heads of gods with various stylistic qualities. The most abundant of these were struck by the Thessalian city of Larissa and by the island of Rhodes. Other issuers included Katane, Olympia, Ainos, Klazomenai, the Satraps of Caria, Tarsos, and what arguably became the most refined coinage with facing heads outside of Syracuse, the magnificent mid 4th century silver coins from Amphipolis.