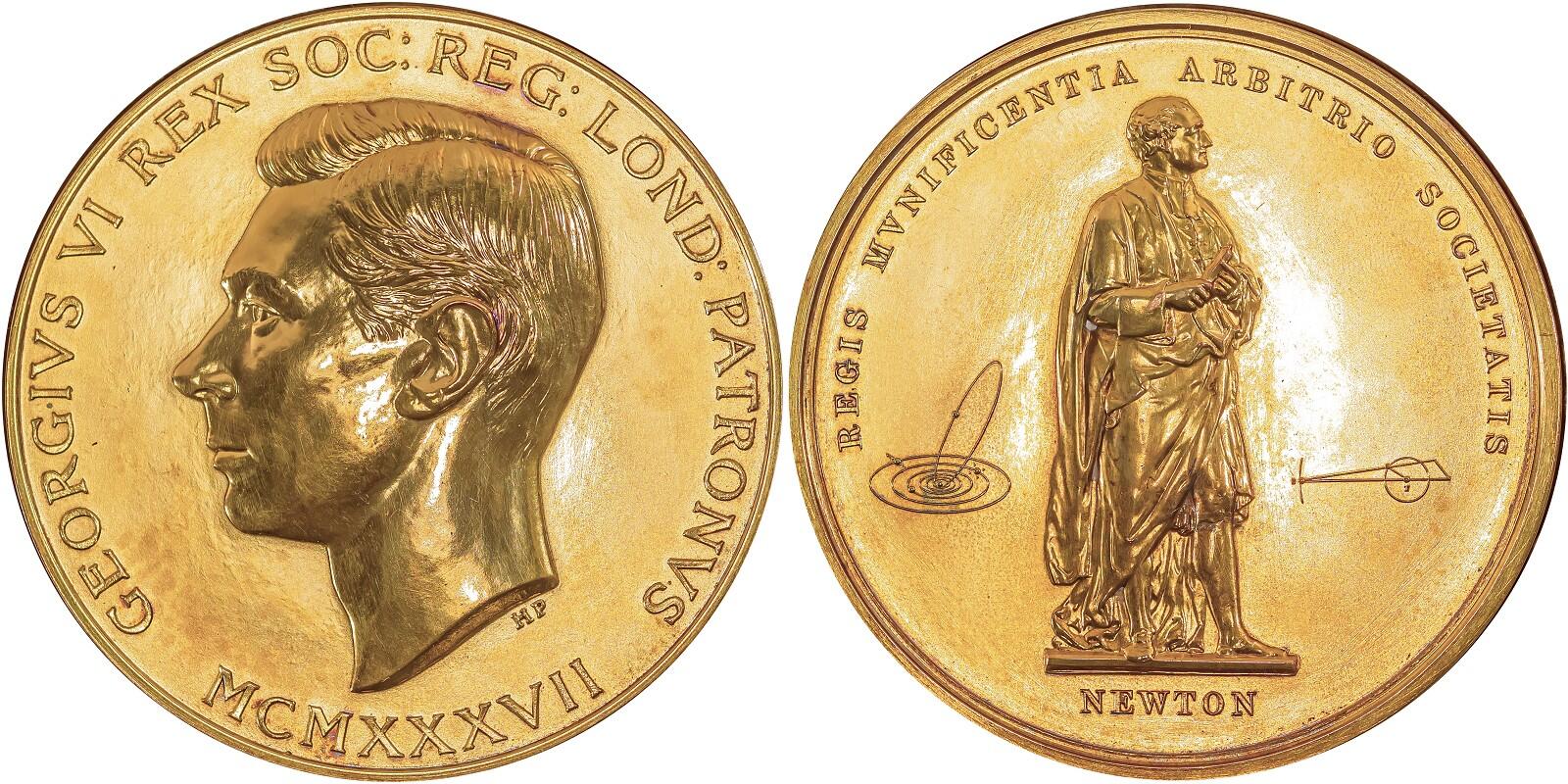 An extremely impressive and rare science medal with possibly the largest depiction of a British king on a coin or medal. A beautiful portrait of King George VI and depiction of Sir Isaac Newton coming from a statue by Roubiliac at Trinity College, Cambridge. Polishing hairlines not detracting from its overall eye appeal with attractive red highlights and uncirculated in its original red leather case. The successful bidder of this lot will also receive the original booklet reprinted from the Royal Society, 1960 comprising a detailed biography.


Sir Ian Morris Heilbron DSO FRS (1886-1959) was a distinguished Scottish chemist who pioneered organic chemistry for therapeutic and industrial use. His enthusiasm for chemistry started very early when he was attending the High School in Glasgow.

He has been described as a remarkable individual and unique mind for a time when science was not commercialised and had little relation with industry. During WWI he served brilliantly in Salonika, Greece where he was awarded the Greek Order of the Redeemer and D.S.O.

Following his return home, he continued his academic career in several universities across the country, most notably refashioning entire departments with indefatigable energy and vision which allowed them to be at the forefront of scientific developments. During WWII he played a leading role in the development of D.D.T., a compound instrumental to fight malaria and yellow fever. Other very notable scientific achievements included work on sterols, vitamin D, vitamin A, terpenes and synthesis and structure of penicillin.

With over 300 publications, Sir Ian Morris Heilbron was not only respected for his great mind but for his generous soul; always greatly concerned for the wellbeing of his students and colleagues. His meticulous attention to detail and distinctive narrative, inspired students around the world which in turn were responsible for great achievements such as Nobel Prize laureate Sir Derek Harold Richard Barton FRS FRSE, Sir Ralph Alexander Raphael CBE FRS FRSE and Sir Ewart Ray Herbert Jones FRS.

The medals offered in this sale (495-498 and 713) are immeasurably greater in value through their award to Sir Ian Morris Heilbron and his contribution to industry and the scientific world."

All lots in this section will open for bidding from the EUR(€) buying price; "99 ΧΡΥΣΌΣ" row, "ΑΓΟΡΆ" column, published by the Bank of Greece on 24 June 2022. There is a 0% buyer's premium for this section, excluding 'live bidding fees 3%' and ability to collect in the UK. Settlement can also be made in USD($) and GBP(£) at +0.5% plus €5 transfer fee from EUR day rate. Refer to T&C's for full details.

The price can be found: https://www.bankofgreece.gr/kiries-leitourgies/agores/xrysos/deltia-timwn-xrysoy/anazhthsh-deltiwn-timwn-xrysoy