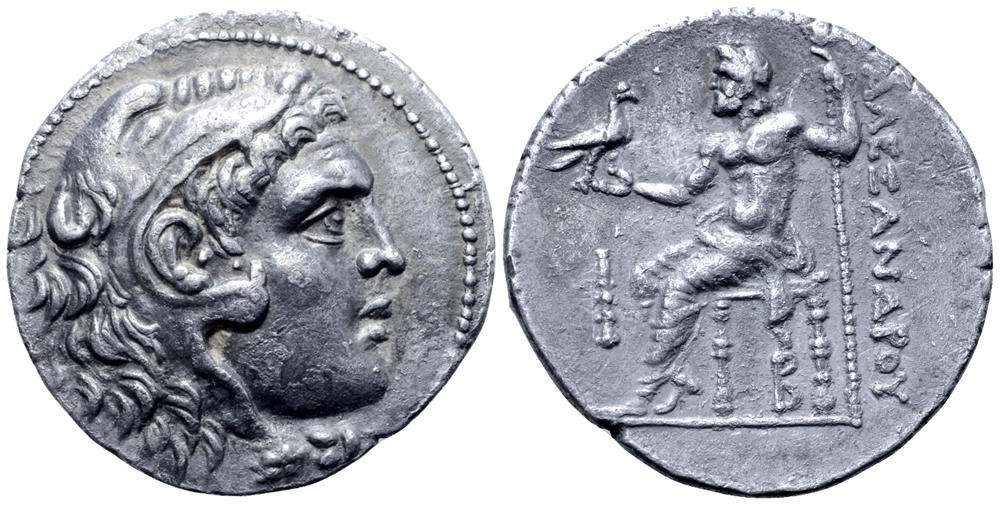 This coin is part of the final issue of 'Alexanders' struck in Macedon, as outlined by Seyrig (H. Seyrig, 'Monnaies héllenistiques, 5. Philippe V ou les Bottiéens', RN 1963, 14-8, pl. ii). Price notes: It represents a revival of the coinage that is much later than the groups of the early part of Antigonos' reign. Seyrig showed that the style of the head of Herakles on these later issues compared closely with that on bronze issues in the name of Philip V, dated from the use of the same symbol and monograms as are found on the silver tetradrachms to the later years of his reign. The Alexander issue is not, however, marked with the controls of the royal coinage of Philip, and was presumably struck to make a particular payment for which this type of coinage was stipulated. The letter B which occurs on the Alexanders of this group may be related to the name of the Bottiaeans of the Emanthian plain around Pella, who at this time struck fractional coinage parallel to the royal issues of Philip V. This suggestion is strengthened by the symbol of the prow (Price 640-2) which echoes the reverse type of the coinage of the Bottiaeans.

F. W. Walbank (Philip V of Macedon, Cambridge University Press, 2013, p. 265) notes however that there is now evidence of at least three other regional issues - those of the Amphaxians, coined at Thessalonica, and those of two Paeonian peoples, the Doberes and Paroreians. Additionally, many cities minted in their own names including Amphipolis, Aphytis in Chalkidike, Apollonia, Pella and Thessalonica. Walbank concludes that this represents a concession of the king's centralised political authority and an unprecedented devolution of minting authority. Rather than necessarily indicating weakness or insecurity though, Walbank makes the case for this devolution being a method of achieving some consolidation following the absolutist policies of the Antigonids, who had ever restricted coining rights, even to the great trading cities on the coasts. He proposes that the success Philip achieved with this policy should be measured by the prosperity of Macedon and the loyalty of its people to the king; the state of the Macedonian state on the eve of the Third Macedonian War indicates that this concession weakened neither nation nor monarchy.