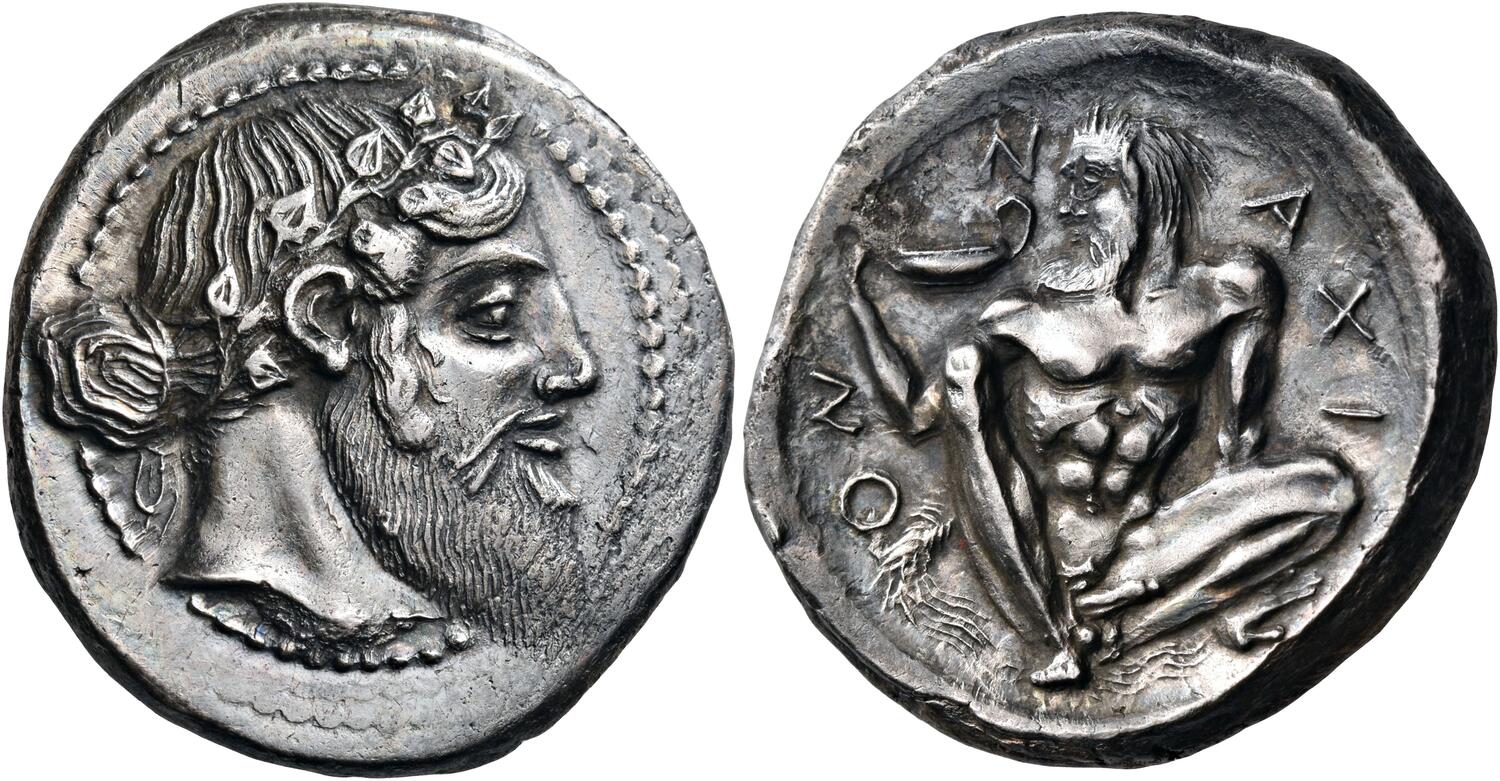 SICILY. Naxos. Circa 460. Tetradrachm (Silver, 29.5 mm, 17.19 g, 10 h). Bearded head of Dionysos to right, wearing ivy wreath, and with his hair tied in a krobylos at the back; border of dots cut through by the beard, the krobylos and the wreath tips. Rev. ΝΑΧΙΟΝ Nude, bearded and ithyphallic Silenos squatting, facing, turning his head to the left towards the two-handled, stemless drinking cup he holds in his right hand, supporting himself with his left hand propped on the ground. Basel 384. Cahn 54.25 (this coin). Franke/Marathaki 102/129. Gulbenkian 230-231. Kraay & Hirmer 6. Rizzo pl. XXIX, 1. SNG ANS 515 (all struck from the same die pair). A spectacular example of this famous coin, one of the very best specimens in existence. A rare example struck early in the series, prior to the start of the disfiguring die break in the field under Dionysos’s nose and before his mouth, which is so often found on surviving examples. Some minor roughness, otherwise, good extremely fine.

From the collection of E. Dresse de Lesbioles, Liege, ex Ars Classica XVII, 3 October 1934, 174, and from the stock of Jakob Hirsch, inventory number 3666.

This is one of the greatest and best known of all 5th century Greek coins. It was produced as a special issue, from a single pair of dies, to commemorate the refoundation of the city of Naxos by its original inhabitants in 461, after their return from exile in Leontinoi. The die-engraver, often known as the Master of the Brussels Aitna Tetradrachm after the unique piece in Brussels that is surely by the same hand, was the finest die cutter then working anywhere in the Greek world. This head of Dionysos is unsurpassed in its power and beauty, but the kneeling Silenos on the reverse is even more impressive in its technical mastery, with the successful use of foreshortening of the right leg a triumph for the time. Silenos is managing to balance himself, but the way he is peering at his cup, as if to see if there is anything still in it, indicates that he is probably very drunk, indeed.