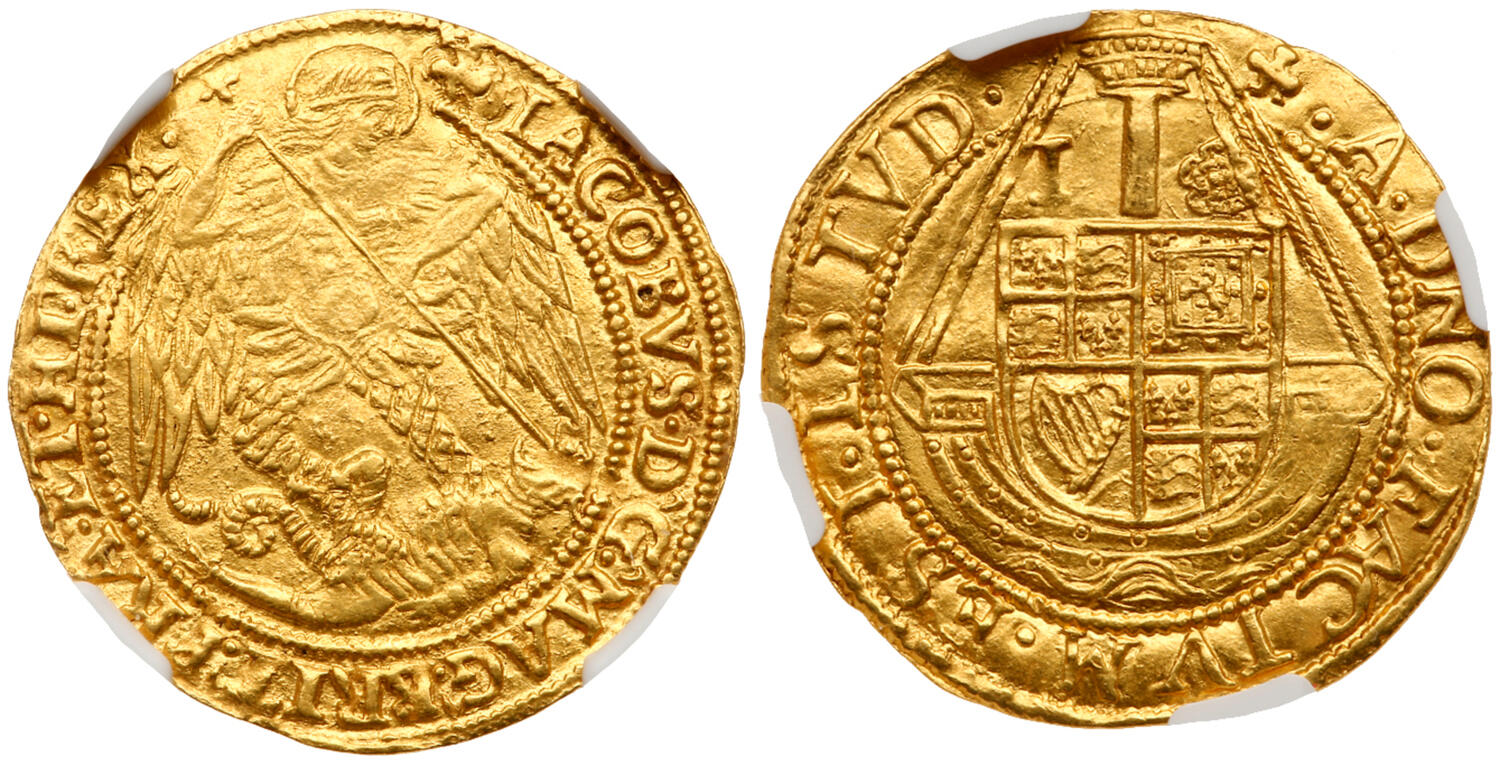 Watch List notes:
Click to save a note
James I (1603-25), fine Gold Angel of eleven shillings, second coinage (1604-19). St Michael slaying dragon right, Latin legend and beaded border surrounding on both sides, initial mark trefoil (1613) both sides, struck over tower over mullet on obverse, struck over tower on reverse, pellet stops, IACOBVS. D' G'. MAG'. BRIT'. FRA'. ET. HI'. REX., rev. flat decked ship sailing, no bowsprit, large quartered shield at centre, I to left of mast, cinquefoil to right, beaded circles and legend surrounding.A. DNO. FACTVM. EST. ISTVD., weight 4.64g (Schneider -; N.2081; S.2615). Lightly toned, fully round, especially rare in unpierced state, we note that there is no example of this mint mark present in the Schneider Collection for this denomination, has been graded and slabbed by NGC as MS63. Estimated Value $12,500
NGC Certification 5880656-021.We note that currently this is the finest graded gold Angel of King James I across both services, being four grades finer than the next contender and top of the population not just of the variety but for the denomination in this reign. The output of fine gold for this period was a mere £1,925, which covered four denominations from the impressive large gold Ryal to the small Half Angel. The Angel was struck quite sparingly as evidenced by the reuse of the obverse and reverse dies from previous mint mark periods. The obverse seems to have started life as a mint mark Mullet piece dating to 1611-12; it was then over-stamped with mint mark Tower for the period (1612-13) and then again with Trefoil for the remainder of 1613, good longevity for this time. The reverse was also used for mint mark Tower then over-stamped for use as mint mark Trefoil.
Ex James Perley Storer, Spink Coin Auction 111, 21st November 1995, lot 162.
Ex A Collection of Angels, Half-Angels and Quarter-Angels, A. H. Baldwin, Fixed Price List, Summer 2015, item ANG015.
Ex A. H. Baldwin, Fixed Price List, Summer 2017, item 134.
Question about this auction? Contact The New York Sale
« Previous lot    Next lot »