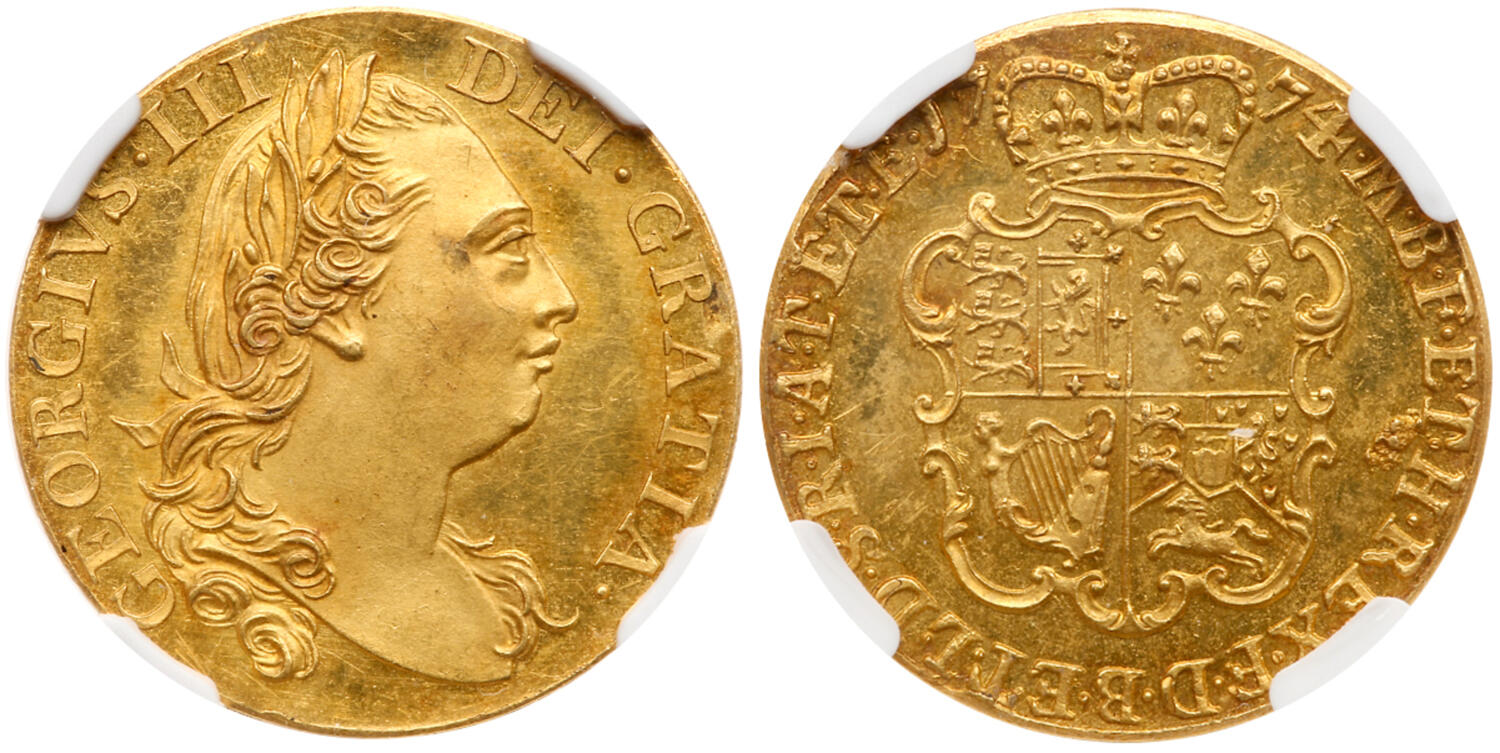 Watch List notes:
Click to save a note
George III (1760-1820), Gold Proof Guinea, 1774. Fourth laureate head right, GEORGIVS .III DEI.GRATIA., rev. crowned quartered shield of arms, date either side of crown, M.B.F. ET. H. REX. F.D. B.ET. L. D. S. R. I. A. T ET. E. (WR 95 R; MCE 379; S.3728). Attractively toned, just a few light hairlines, with die flaw to right of shield on reverse, has been graded and slabbed by NGC as PF63, very rare. Estimated Value $12,500
NGC Certification 4745877-001. We note across both services that at the time of writing only 23 examples of this rare proof have thus far been graded with the finest two being at 65 level. The Latin legends translate to on obverse "George III by the Grace of God" continuing on the reverse in abbreviated Latin which if in shown in full reads "Magnae Britanniae Franciae et Hiberniae Rex Fidei Defensor Brun et Lunebergen-sis Dux, Sacri Romani Imperii Archi-Thesaurius et Elector" and translates as "King of Great Britain, France and Ireland, Defender of the Faith, Duke of Brunswick and Luneberg, High Treasurer and Elector of the Holy Roman Empire." 1774 marks the first year for the fourth bust of George III and perhaps why a limited number of proof coins were struck. The Mint produced £4,685,624 worth of gold coin in the calendar year of 1774, a large amount as they were only striking gold and copper at this time with no silver output. The amount produced was also boosted by the fact that Parliament had passed an Act to call in all the underweight Guineas in circulation below 128 grains in weight. Conducted in two stages first all coin below standard weight was demonetized on 24th June 1774, with a second order specifically to demonetize guineas below 128 grains on 1st May 1776. The recoinage of the £16,500,000 called in accounted for high outputs until 1776, with much of the coin then finding its way across the Atlantic to the Americas.
Question about this auction? Contact The New York Sale
« Previous lot    Next lot »