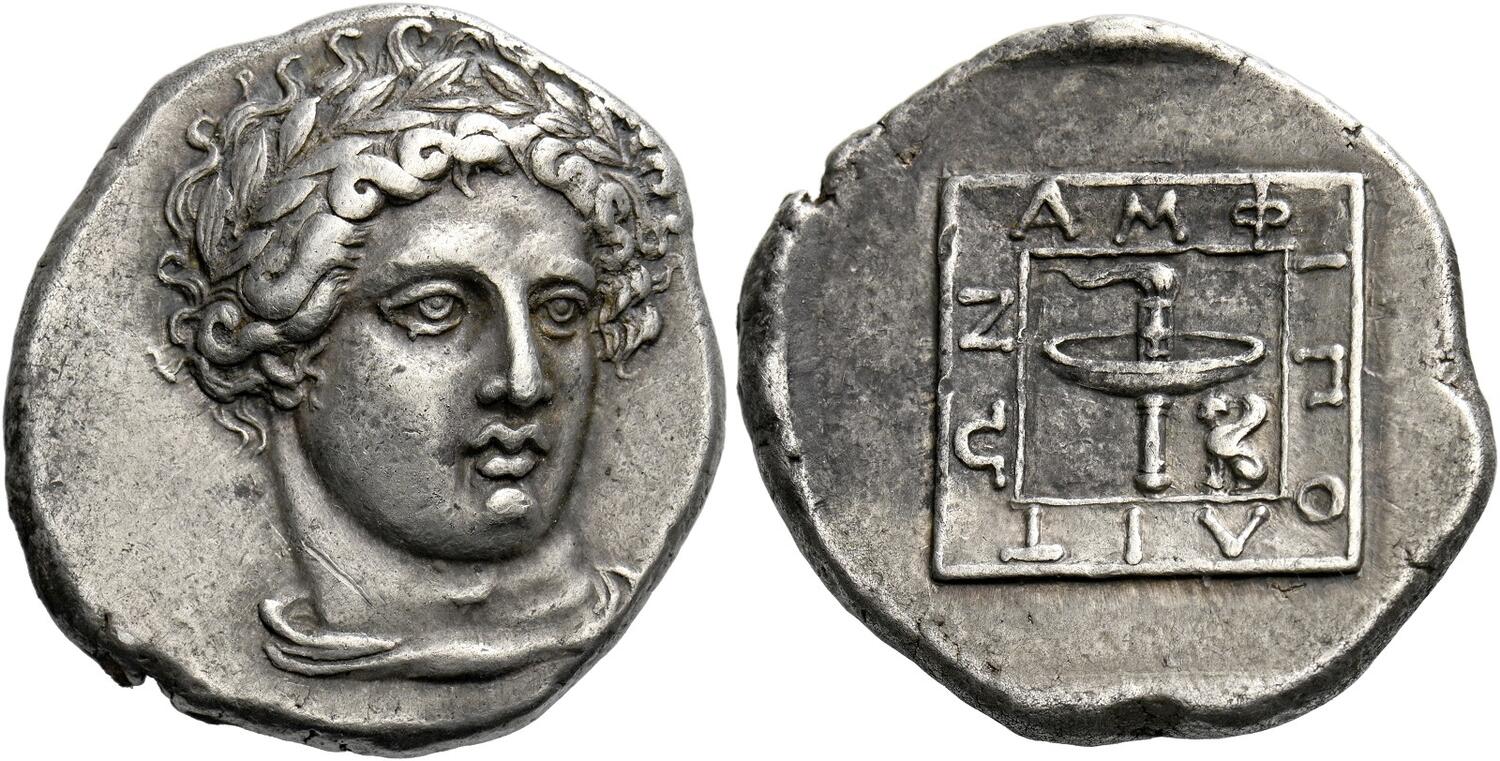 Ex Triton sale XIV, 2011, 60.
Amphipolis was strategically located on the site of an old Thracian settlement known to the Greeks as Ennia Hodoi ("Nine Ways") because nine roads converged there. As it commanded a path through Mount Pangaion and a bridge over the Strymon River and had access to timber as well as gold and silver mines, Ennia Hodoi was an important settlement and drew attention from both Greeks and Persians. In 497, Aristagoras, the exiled tyrant of Miletos, attempted and failed to establish a colony there while Xerxes I infamously sacrificed nine boys and nine girls at its bridge in 480 BC during the initial phase of his disastrous invasion of Greece. The Athenians attempted to colonize Ennia Hodoi in 466 BC, but were fiercely resisted by the local Edonean Thracians. At last, in 437/6 BC, the Athenians triumphed and took Ennia Hodoi as their own, refounding the Thracian settlement as the Greek city of Amphipolis. Amphipolis derived its name, which means "Surrounded City," from the fact that the Strymon River flows almost entirely around the site of the city. The present tetradrachm belongs to an extensive series featuring the facing head of Apollo and a race-torch struck in the first half of the fourth century BC. Apollo is prominent here as the usual patron of Greek colonies, but his image is probably informed by that of the nymph on contemporary issues of Larissa in Thessaly. The race-torch refers to the night races held at Amphipolis in honour of the local goddess Artemis Tauropolis. This coin is notable not only because the treatment of Apollo is arguably the finest in the entire Amphipolitan tetradrachm series in terms of its artistry and classical sensitivity. It is also notable because it is thought to have been struck at a time when the city was under attack by Philip II of Macedon. Amphipolis had been a source of conflict between Athens and the kings of Macedon since the late 360s BC, when the city was captured and garrisoned by Perdikkas III. As part of his Machiavellian diplomacy, Philip II removed the garrison in 359/8 BC to give the illusion of recognising Athenian claims, only to declare war on Amphipolis in 357 BC. The king besieged the city and took it through treachery. In the following year the Athenians finally resigned themselves to the loss of Amphipolis-once a jewel in the crown of their empire-to the Macedonian kingdom.