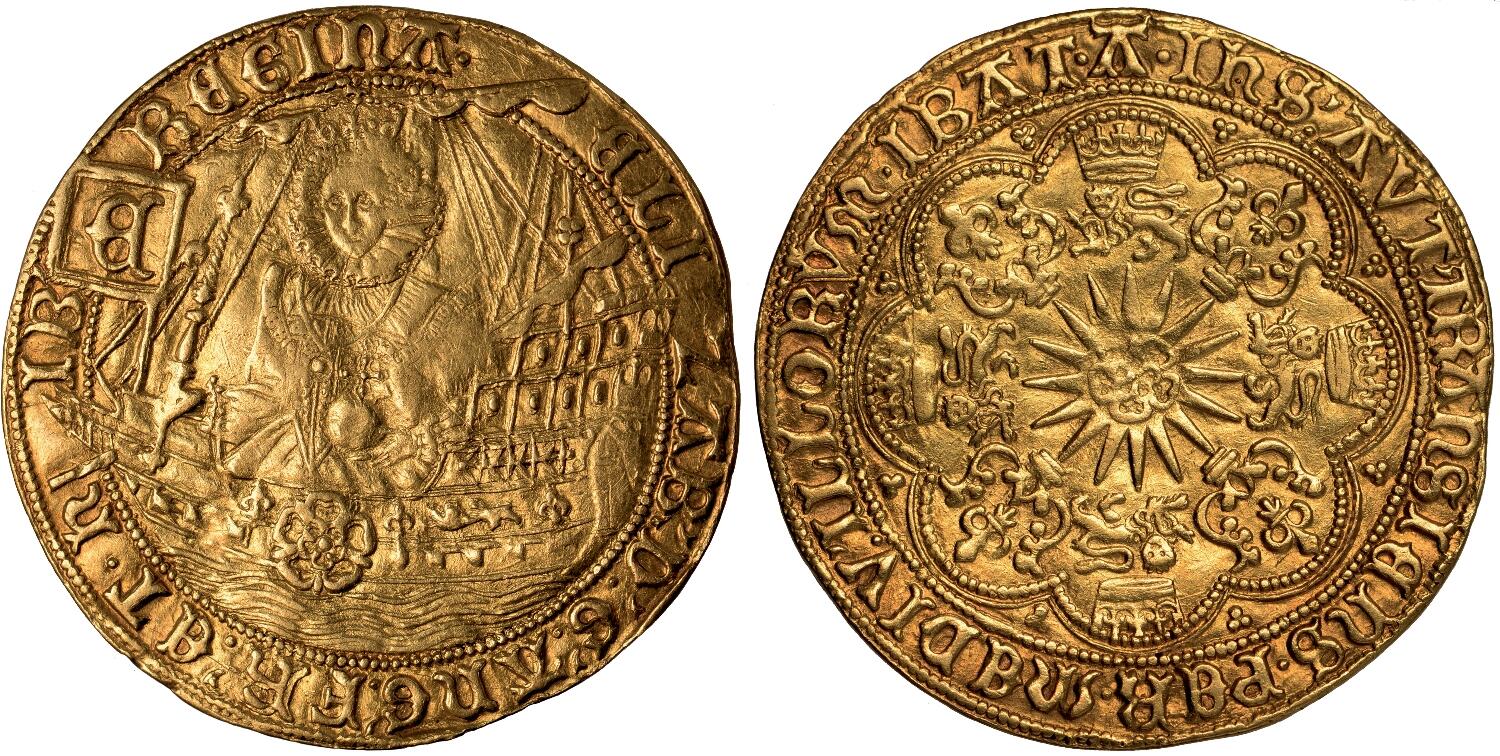 Watch List notes:
Click to save a note
Elizabeth I, sixth issue, ryal, mm. A (1583-85), queen standing in ship, holding orb and sceptre, rose on ship's side, E on flag at bow, ELIZAB D G ANG FR ET HIB REGINA, rev. rose on spur rowel in centre of royal cross, crowned lions in angles, pellet stops, IHS AVT TRANSIENS PER MEDIV ILLORVM IBAT, wt. 7.56gms. (S.2530; N.2004; Schneider 784; Brown & Comber B3), almost very fine/good very fine, a wonderfully round, full flan allowing for complete legends, slight weakness of detail on the queen and at centre of reverse, overall an excellent example
Purchased Knightsbridge Coins, 2003.
This magnificently designed and engraved issue lasted for just a decade, coins bearing the 'A' initial mark being the first made. Struck using gold that was nearly pure (.995 fine), these pieces were intended for trading across Europe and indeed throughout the Mediterranean. The obverse image suggests no less: the crowned, bejewelled sovereign in her elegant ruff peers intently at the viewer from the deck of her warship. Her flag bearing her single initial flutters to her right with the wind coming from behind, an image highly suggestive of travelling forth in search of trade or triumph. Replacing the usual Tudor royal shield on its reverse, this coin displays a bold spur rowel, again suggestive of vigorous advance-the spur used to urge on horses, the rowel being the sharp-pointed revolving disk at the end of the spur-and the device is surrounded by both royal insignia and a legend that, again, suggests passing onward. Most of the original mintage has vanished, and this coin remains one of the most desired of all Tudor monies.
(40000-50000 GBP)
Question about this auction? Contact St. James's Auctions
« Previous lot    Next lot »