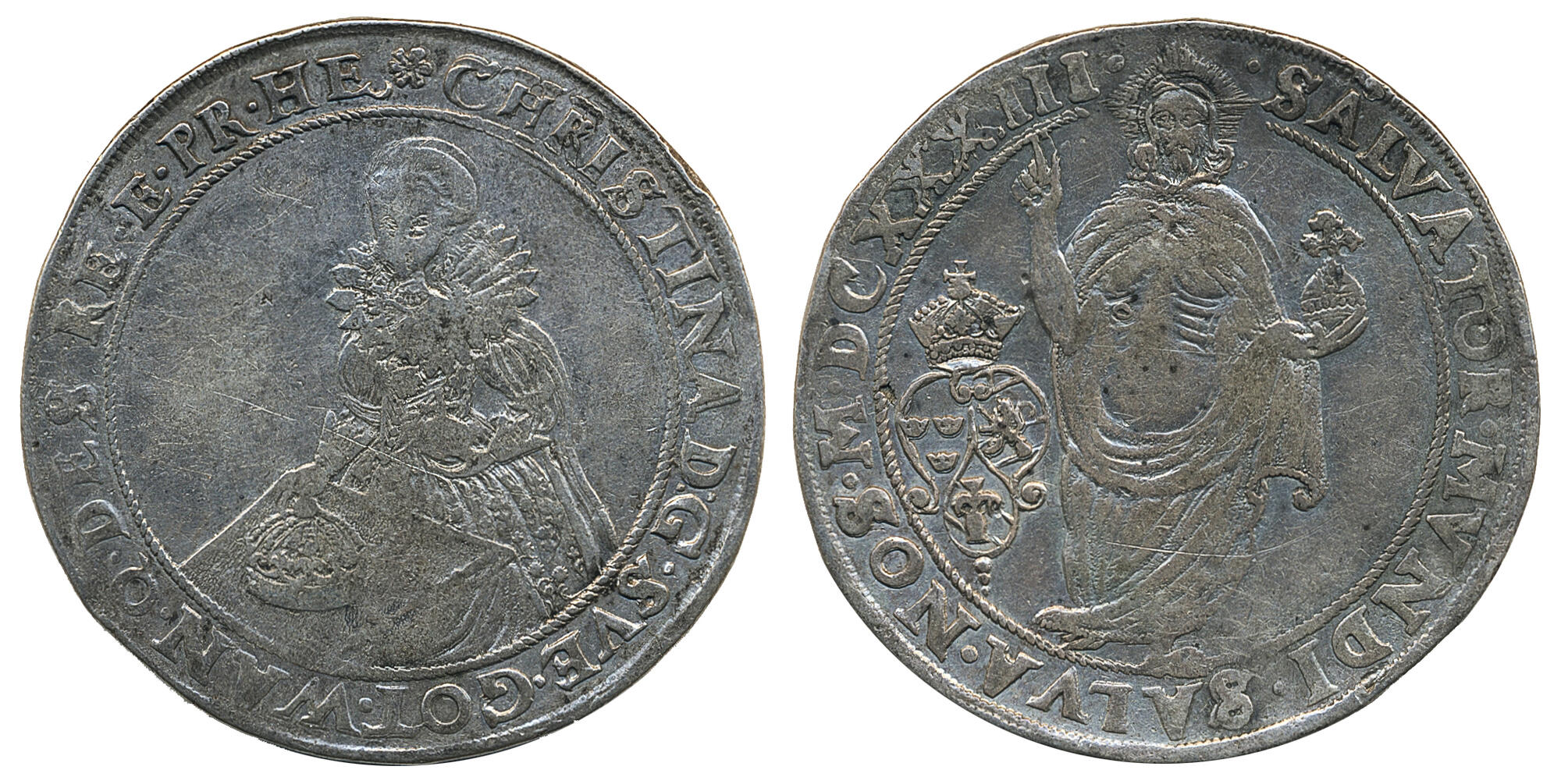 Watch List notes:
Save a note here
Sweden, Kristina SM 9 1 riksdaler 1633 28,49 g. Stockholm. One year type. At present we know of approx. 10 pcs in private hands, including the beautiful example in Avesta Coin Museum. Weakly struck, minor thin scratches and a rim nick. RR. Ex Bonde auction 1, lot 352. SMB 8. The very sought after riksdaler type of 1633 depicts the barely 7 year old Queen standing behind a table. Kristina is holding the orb (Riksäpplet) in her hand while the crown and sceptre are placed on the table. It is noticable that of the regalia the key is missing. The well known numismatist and official C. R. Berch in 1773 writes in his "Beskrifning öfwer Swenska Mynt ..." (Description of Swedish Coins) on p. 142: "Another [riksdaler] of year 1633, thus remarkable, even though crown and the other [regalia] are on the table, she holds the orb in hand, despite being a minor, she, and no one else, was King [Sic!] of Sweden." By tradition this coin has been attributed to be minted in Stockholm, but it appears to be consistent with modern research. Most experts appear in agreement that the engraver should be goldsmith Hans Weiler (d. 1656). Weiler is first mentioned as engraver of Duke Johans coinage in Söderköping in 1617. Several contemporary medals of the era that have been attributed to Weiler show similar style and composition as this first type of Kristina's riksdaler. Earlier numismatists have referred to a work by N. L. Rasmusson, "Medaillen auf Christina, eine Skizze", published in "Queen Cristina of Sweden, Documents and studies", Stockholm 1966. Though Rasmusson himself refers to Strömbom and writes the following: "Strömbom (Oldenburg, aa.O s. 135 ff.) hat diesem Medaillentyp dem Reichswardien und Goldschmied Hans Weiler zugeschrieben (bekannt seit 1621, gestorben 1656), der 1634, 20 grössere und kleinere Konterfeis der Königin ausführte." This very scarce riksdaler is given a mintage figure of 4000 pcs by K-A. Wallroth in his work "Sveriges mynt 1449 - 1917", published in Numismatiska Meddelanden (NM XXII), Stockholm 1918. 1+
Question about this auction? Contact Myntkompaniet/AB Philea
« Previous lot    Next lot »