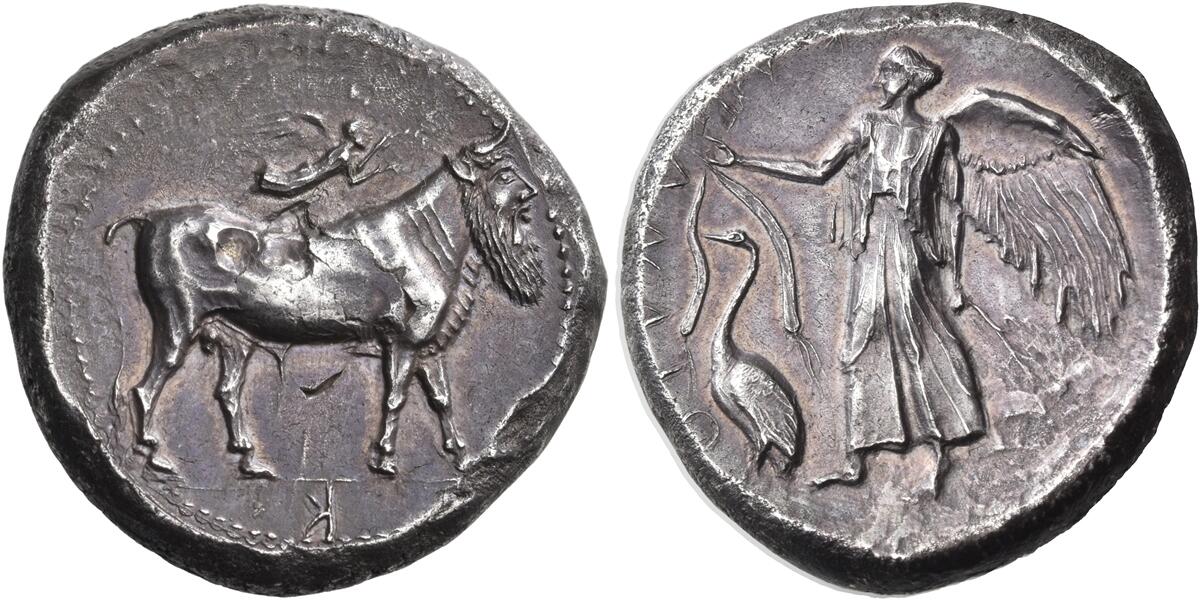 Watch List notes:
Save a note here
SICILY. Katane. Circa 461-450 BC. Tetradrachm (Silver, 26 mm, 16.92 g, 8 h). Man-headed bull, the river god Amenanos, walking to right; above, Nike flying right to crown him; in exergue, K. Rev. KAT-ANAION Nike, with open wings, walking to left, holding taenia in her right hand; in front and a branch with her left; at her feet to left, heron standing left. Randazzo -; Rizzo -; SNG ANS -; and apparently unpublished with the heron, save for its auction appearance. Apparently unique. A very handsome coin, well-centered, with an unusually fine head of Amenanos and with a charming depiction of Nike seemingly walking with a heron. Finely toned. Minor traces of overstriking, otherwise, extremely fine.
From a European collection and from that of the Comery family, Roma 6, 29 September 2013, 394.

The head of Amenanos on this unique tetradrachm has a very close resemblance to the amazing facing head of Alpheios, which appears on an equally unique, yet even more spectacular, tetradrachm struck by Gelon in Syracuse, c. 485 (C. Arnold-Biucchi, and A.-P. C. Weiss, "The River God Alpheios on the First Tetradrachm Issue of Gelon at Syracuse," QT XXXVI, 2007, pp. 59-74, pl. I, 1-1a). The fact that the die engraver managed to give Amenanos such a finely detailed and individualistic head is nothing less than a tour de force. As for the naturalistic heron that seems to be happily walking along with Nike (could it be a pet?), it has been explained as a reference to Athena but this is, perhaps, going too far. We should see it as merely being a clear allusion to the river - the modern Amenano - the river god Amenanos personified. Thus, we have the river god crowned by Nike with a wreath on the obverse, while on the reverse, Nike is holding a taenia over the head of one of the river's characteristic birds.