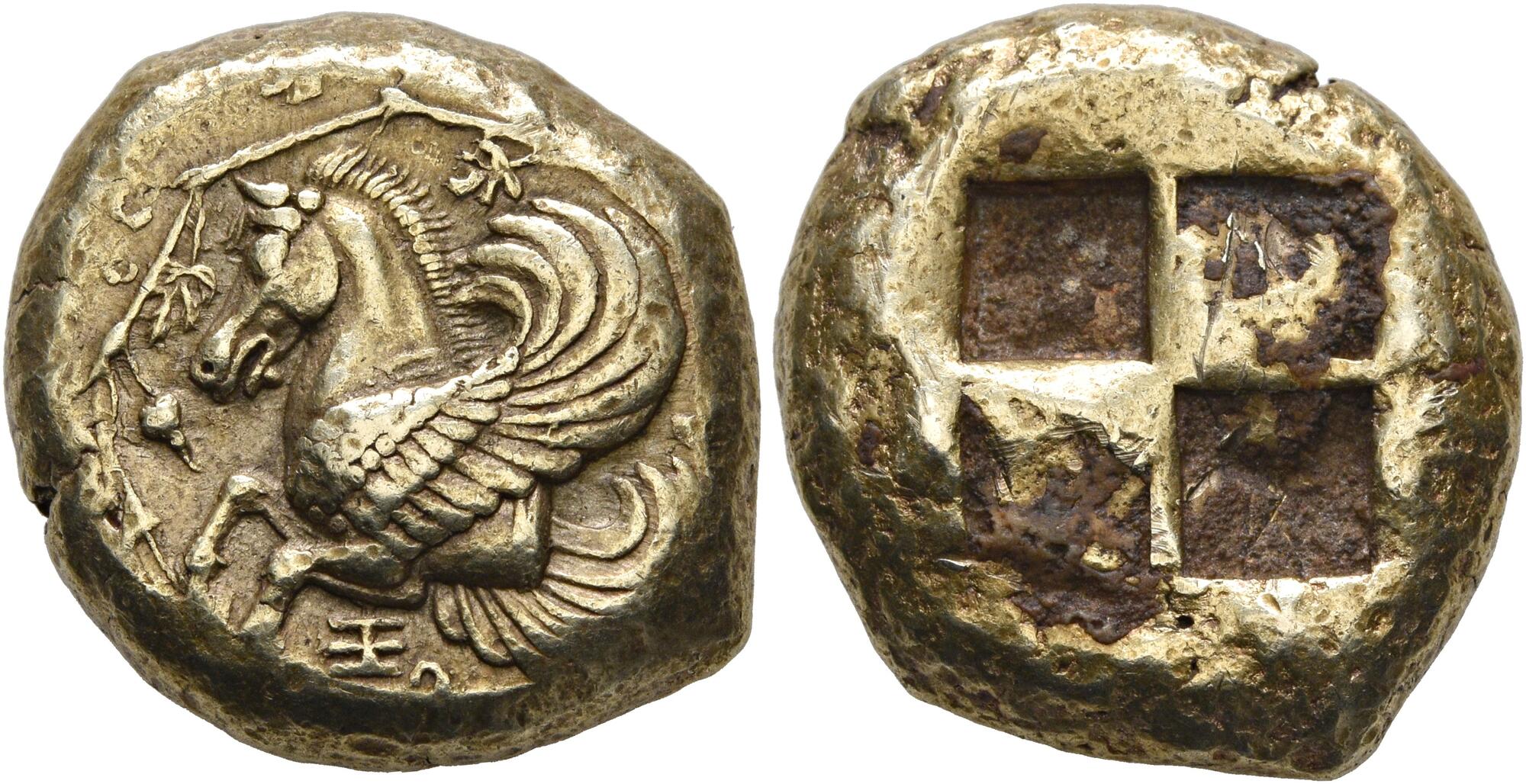 Exactly when the Lampsakean electrum staters were issued has been difficult to establish. Originally believed to have been struck before the Athenian Currency Decree of circa 449 BC, the appearance of the Pegasos type in the 1875 Vourla Hoard with a burial date of circa 410-400 BC led to a downdating of the series to the late 5th century BC. It is now associated with the revolt of Lampsakos against Athenian supremacy following the arrival of the Spartan general Derkylidas in northwestern Asia Minor in 411 (not 412) BC, providing a brief window of time during which these beautiful staters were likely struck.

Athens' might had declined since its catastrophic Sicilian campaign of 415-413 BC, and as a result, revolts broke out throughout the Delian League in the following years, many of which were, if not initiated, at least supported by Sparta. Unfortunately for the Lampsakeans, Athenian naval power was still substantial, and the city was taken back within a short time by the admiral Strombichides, sailing from Chios and defeating a civic defense force on land before storming the still unfortified polis (Thuc. 8.62.1-2). The following years saw several Athenian victories against the Spartans, the most important of which was the Battle of Kyzikos in 410 BC, in which the Athenian navy, led by the ingenious, though untrustworthy Alkibiades, crushed its opponent, sinking half of the Spartan fleet and capturing the rest. However, with the disaster in the Battle of Aegospotami in 405 BC, the Athenian naval empire became untenable and Lampsakos was subsequently captured by the Spartan commander, Lysander, who would in 404 BC accept Athen's surrender. It seems likely that the 1875 Vourla Hoard was buried in these perilous years, perhaps even forming actual plunder from the looting of Lampsakos.
Turning back to the coin itself, it is worth noting that we have good historiographical evidence for Lampsakos' vineyards, hinted at by the appearance of a delicately engraved grapevine around Pegasos, namely in a passage by Strabo, who, speaking of neighboring Priapos, says that '[...] for their country is abundantly supplied with the vine, both theirs and the countries which border next upon it, I mean those of the Pariani and the Lampsakeni. At any rate, Xerxes gave Lampsakos to Themistokles to supply him with wine.' (Strab. XIII, 12). We find similar references to Lampsakos being given to the great Themistokles by the Persian King Xerxes specifically to supply him with the area's local wine in Thucydides ('He was governor of the district, the king having given him Magnesia, which brought in fifty talents a year, for bread, Lampsakos, which was considered to be the richest wine country, for wine, and Myus for other provisions.', Thuc. 1.138.5) and Plutarch ('Three cities, as most writers say, were given him for bread, wine, and meat, namely: Magnesia, Lampsacus, and Myus.', Plut. Them. 29).